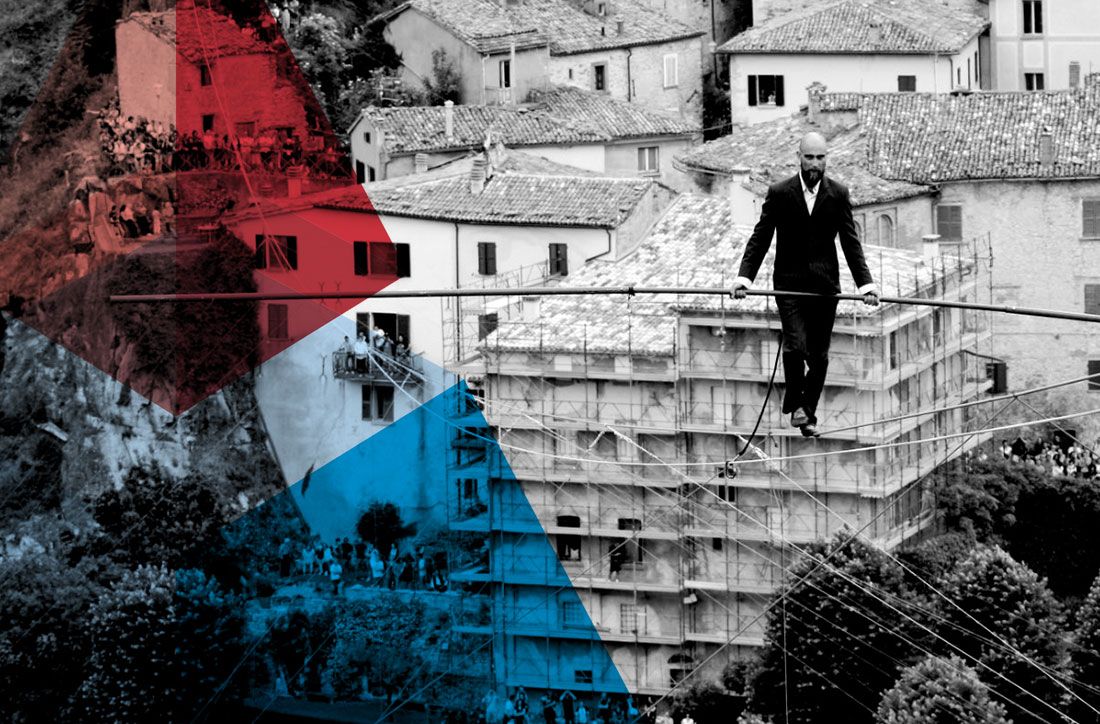 The funambulist’s metaphysics. Precision and dynamic equilibrium from Philippe Petit to Andrea Loreni

Nothing is by chance. This is how we felt when after contacting such an extraordinary person as Andrea Loreni, maybe the most famous Italian funambulist, we discovered that in a few days movie theatres all over Italy were going to show ”The walk”

Nothing is by chance. This is how we felt when after contacting such an extraordinary person as Andrea Loreni, maybe the most famous Italian funambulist, we discovered that in a few days movie theatres all over Italy were going to show ”The walk”. For those who have not seen it yet, the movie is dedicated to the greatest achievement made in August 1974 by Philippe Petit: the high-wire walk with no protection between the Twin Towers of the World Trade Center. Surely, the adaptation by Robert Zemeckis suffers a little from the excessive spectacular character that is typical of American productions, leaving little space to the inner journey implied in the work and life of such an extraordinary person. For those who have never walked on a thin wire tensioned above an empty space, it is almost impossible to imagine the heights challenged by a wire walker. Some help comes from Petit’s warning contained in his Treaty of Funambulism according to which “The wire is not what you imagine. It is not the Universe of Lightness, of space, of smile. It is a sober, rough, discouraging profession. And those who are not willing to get into a fight with useless efforts and deep dangers, traps, those who are not ready to give everything they have to feel alive, those do not need to become wire-walkers. Most of all, they could not”. But there is something more, something that goes beyond the mere technique, the perfect control of the human body and the endless exercise. It is the total absence of “horror vacui”, the metaphysical control of emptiness and solitude: “Prisoners of a piece of space, you will fight until the end of your lives against mysterious elements: the lack of matter, the odor of balance, the vertigo of multiple sides and the strong desire of getting back down on earth. All this will overwhelm you. This vertigo is the drama of dancing on the wire, but I’m not scared […] I am never scared on the wire, I’m too busy”.

In a few words, it is a lesson for life. It is not too distant from the concepts that permeate our blog, although in different domains. Precision and dynamic equilibrium as a life style, courage and seamless adaptation capacity. This is the reason why, in order to keep following the path that has taken us up to this point, we got in touch with Andrea Loreni, the Italian wire-walker philosopher in order to catch from the real voice of a protagonist a depth that our fervid imagination would never reach otherwise. No other choice could be more appropriate. After enthusiastically accepting our short interview (another sign of his greatness), he invited us to an event on “Where Zen and wire-walking meet, words in the place where art is born”.

Andrea, given the fortuitous coincidence with the launch of “The walk” in the movie theatres, we can’t avoid asking you if you have had the chance of seeing Robert Zemeckis’ film. What’s your opinion about it?

I haven’t seen the movie, but I have read the book. The most important thing, for me, is not the walk itself, but the fact that Petit has given himself a chance, that he has seen a place where to walk between the two towers.

When reading Philippe Petit’s works, you see something more than simple human inquietude, a form of love for risk in itself. The wire is an inner journey, a metaphysical way. Are these only suggestions of the non-initiated?

I am not in love with risk, I choose it: risk is an existential category: we exist and therefore we take the chance of no longer existing. We can pretend this is not true, we can think that all risks can be controller or cancelled, and live a non-authentic life. Or, we can choose to live risk as another aspect of our existence. On the wire I find a way to the absolute. Before climbing I leave behind the past and the present that determine my relative aspect. By living the present, I accept to get lost in emptiness. And sometimes, in that emptiness, I can find a moment of equilibrium, a moment of perfection.

You are defined, or you define yourself, as a funambulist- philosopher. What is the mutual influence between these two souls?

The philosophical dialectics helps me to explain the funambulist’s experience, to interpret the symbol represented by my walks. On the other than, philosophy and my essence as a wire-walker share the search for the truth, the love for knowledge, but the ways are rather distant. Walking on a wire is a factual truth that has nothing to do with the Western philosophical speculations: when I’m on the wire, I don’t think or investigate the truth, I am the truth. This is for me the truth of art and of any other action in which doing and being coincide, where being is so dense that it leaves no space to anything else except for what exists. There are no thoughts about before or after, only a very deep present.

For the Western philosophy, starting from Aristotle, emptiness has a substantially negative meaning. For Buddhists, instead, emptiness is not similar to nothingness. It has its own reality. How is emptiness perceived by a funambulist philosopher?

For me, emptiness is a possibility. When I look down, I’m scared, but I’m used to that kind of fear, I know that if I accept to get lost in emptiness, I can gain the Absolute. Emptiness is for me the matrix that lies under individual minds; it is the matter on which art draws inspiration to speak to everybody.

Philippe Petit affirms that limits exist only in the soul of those who lack dreams. Which is your sense of limit?

During my workshops I suggest to those who are on the wire to stay there a little longer, before falling, to explore the area in which they think they can no longer stay without falling. If you get to know it little by little you can learn how to control it, how to feel comfortable even in a situation that you used to consider critical and dangerous. One degree at a time, I can improve my capability of staying on the wire.

And finally, let’s talk about the “fil rouge” of our blog. What comes to your mind if I say Dynamic Equilibrium? And Precision?

Precision makes me think about my feet walking on a 16 mm- wide path. I associate the idea of dynamic equilibrium to a search. The perfect walk is a sequence of 3,600 instants of balance, when I am immovable and I am everywhere. The rest is losing and finding the equilibrium again every single second.

Finally, on which funambulist projects are you working today?

The last artistic project is TRK#1, a production by an artistic collective that has formed recently called nogravity4monks, in which I play the wire: thank to a pick up, wire vibrations are translated into sounds and I create the sound-emotional base that interacts with two guitars, one viola and one violoncello. My solo projects instead are in Japan: I want to walk over the lake of the Sogenji temple in Okayama, where I have already been on several occasions to study Zen and shoot a documentary film of the event, on the place where Zen and funambulist meet.

Our sincere thanks go to Andrea Loreni for accompanying us in the short walk to search for the authentic meaning of our work.